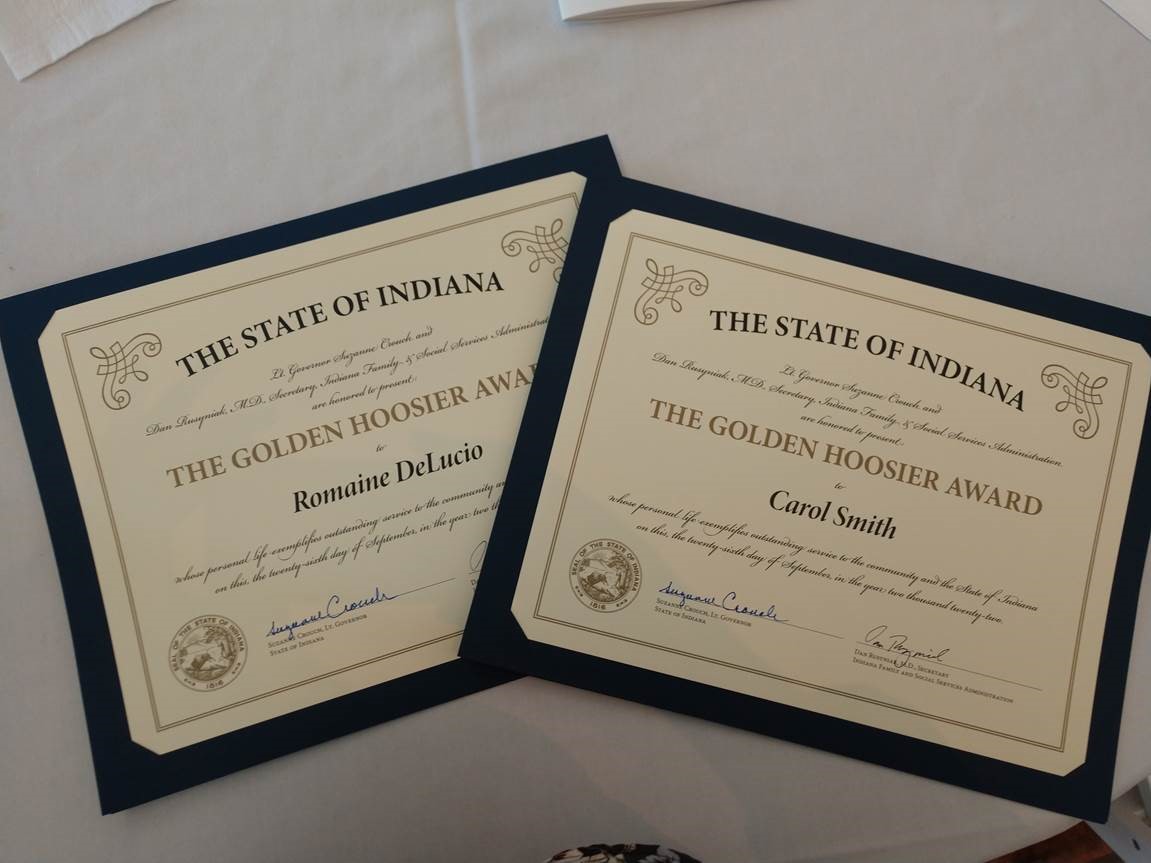 Carol Smith of Jay County and Romaine DeLucio of Wayne County were two of 20+ older adults to receive the Golden Hoosier Award from the State of Indiana in September. The Golden Hoosier Award acknowledges outstanding Indiana senior citizens for the impact they have made on the lives of others and their entire community. The award is the highest honor given to a senior in Indiana.

About Carol Smith
Nominated by: Dana Pierce, LifeStream Services
Carol cares deeply about her neighbors, her community, and her church. Carol became a member of our volunteer team in March 2020, just at the onset of the pandemic. She enlisted the help of her fellow church members and dove right in, organizing the Second Harvest Food distribution for seniors in the church’s common room. The community’s first encounter was in the form of shopping. She organized volunteers to assist participants in shopping and aided in getting the goods to their automobiles.

The following distribution had to be changed because the pandemic had arrived. There was a demand for drive-through food distribution. Carol gathered the volunteers once more and launched the hugely successful drive-through food distribution serving over 100 households. Always keeping in mind where the line would begin, how to communicate with the volunteers, and how to keep everyone safe. Carol stated in an interview, “the first thing the participants receive when they arrive is a smile. Many of those that come to the distribution live alone and probably don’t receive the gift of a smile too often”. She went on to say “We get a blessing from all over, from the people that come to get something, but actually, they give us something, as it is a joy to be with them and do that”.

Carol shares her time with many other types of organizations as well. She is a member of Asbury choir for 61 years, and Asbury Handbell Director for, 27 years. Creator/Chairperson of Community Thanksgiving Dinner-ongoing- now in our 32nd year. Chairperson of multiple church committees- 15 years. Created a back-to-school program assisting families in the community with back-to-school needs. Created Giving Christmas Tree assisting families in the community with clothes/toys/gifts for adults as well as kids. She kept all identities private to preserve their self-esteem. Fair Booth – 30 years. Had a booth at the county fair set up with chairs, a checkerboard, a water cooler, and a guessing game of fish crackers. The theme was “Fishers of Men”. Fairgoers could sit and get a cool drink at their leisure; teenagers played games of checkers (one mother commented she had not seen her two teenagers playing a game together in years), and the guessing game consisted of guessing how many crackers were in the jar. The winner received a new tackle box and reel. It was a meeting place for many families. Head of Asbury Fellowship time – 15 years. Aware everyone is born with an “I” on their back as all want to know they are important. Created a birthday card program where cards were signed by church staff and mailed at the proper time. Created monthly birthday celebration with cake & balloons naming all having birthdays that month and honoring them. Co-chair of meals for funeral dinners – 5 years and ongoing.

About Romaine DeLucio
Nominated by: Shara Short, Reid Health
Romaine has been a volunteer at Reid Health for an outstanding 41 years. During this time Romaine has assisted in the Print Shop, Library, Special Projects, and Fundraisers. Romaine has also served on our Auxiliary Board as the President and Ways and Means Chair for several terms. Within these positions, Romaine has been a big help in several departments in assisting in many office tasks.

In her service on the Board, she assisted in coordinating the Auxiliary Fundraisers. She is always willing to offer extra help for special events. Romaine is also the 2006 Lifetime Award Recipient chosen by her fellow volunteers to be recognized for her many years of service excellence. She is a glowing example of what it means to give back.

Carol and Romaine are two of many volunteers who make a difference across the state of Indiana and beyond. LifeStream relies on volunteers to assist in a variety of ways including passing out meals at the café sites, making calls and visits to lonely older adults, crocheting or knitting gifts for clients, conducting administrative office tasks, and more. Those interested in volunteering with LifeStream Services can learn more by visiting lifestreaminc.org/support/volunteer or contact Laura Bray, Volunteer Services Administrator, by calling 765-759-3372 or email lbray@lifestreaminc.org.